The implied forward rates are interpreted as follows –

(i) Short term – likely interest rates will be steady until circa October 2020.

(ii) Medium Term – likely interest rates will be steady to slightly higher until March 2021 and then will begin increasing. 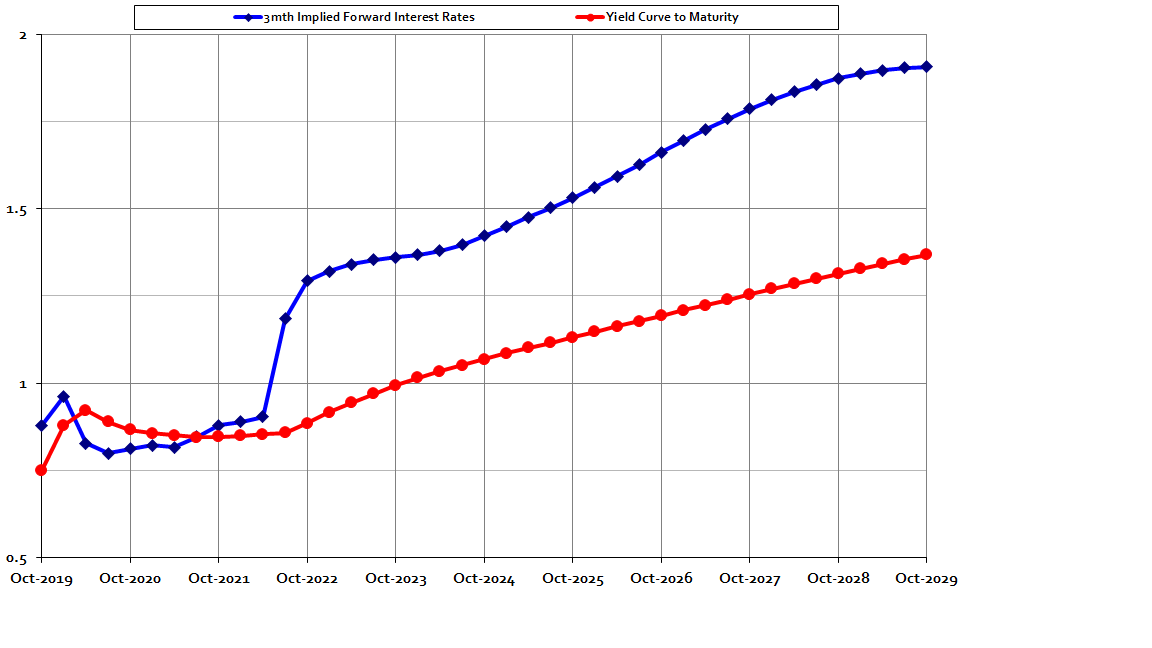 Should the RBA follow the market's interest rate cut pricing?

Further official cash rate cuts are possible if a global Coronavirus COVID-19 pandemic develops and is sustained for longer and substantially hurts the economy. &nbsp; The market&rsquo;s 0.25% rate cut pricing (reflected in the below interest rate yield curve as at 29 February 2020) and expect...

What is the Yield Curve implying? &nbsp; The below graph plots the&nbsp;Implied Forward Interest Rate&nbsp;yield curve (blue line) which is derived from the Interest Rate Swap yield curve (red line) as at 31 December 2019. Any changes to today&#39;s yield curve will also change the implied...

Not often you will find graphs that show what your great grandparents paid for their house and what their home loan interest rate was at the time. Now you do. Owner Occupied Variable Home Loan Interest Rates since 1959. &nbsp; Sydney Median House Prices since 1979 (Author QED Realty)...

You have heard it before, many, many times before (so we shall keep it short) from brokers to branch lending experts to the media - applying for a home loan requires making many decisions ... most borrowers struggle with the decision to fix or not to fix ... banks always win when you fix your home l...

Is the Multi-Decade Bond Bull Market Over?

Yes! It is very likely that the 3-decade long bull bond market (lower interest rates) ended on 2 August 2016. &nbsp; On this day, the 10-year Commonwealth government bond futures contract traded at 98.20 (equivalent to 1.80% yield) on the ASX 24 Futures platform (aka Sydney Futures Exchange)....

The Reserve Bank decided to leave the Official Cash Rate unchanged at 1.50% on 6 December, 2016. &nbsp; Why did some lenders increased variable interest rates the day before the Reserve Bank board meeting? This is what the lenders have said. There is a need to regularly review interest r...

The Reserve Bank reduced the Official Cash Rate from 1.75% to 1.50% on 2 August 2016. Is the multi-decade bond bull market over? The 3 decade long bull bond market seems likely to be almost over because &ndash; 1. First, quantitative easing, bond purchases and negative interest rates are in...

What does the Interest Rate Swap Yield Curve Imply? What is a Yield Curve? The yield curve shows the relationship between yield and the term to maturity, at any given point in time. It provides important information on what the wholesale market&rsquo;s expectations are on monetary policy, e...